Dave, or Why I am Shaving my Head for Charity 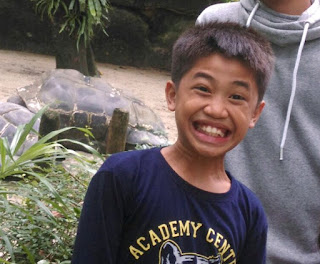 Dave is ten years old, and the son of my helper Mariza. Mariza has lived with us since Small Child was four months old, so almost six years now. Her three kids live with family in the Philippines while she works, hundreds of miles away, to support them.

This is Dave posing with my kids when he and his brother and sister came to Singapore and stayed with us for three weeks over Christmas last year. 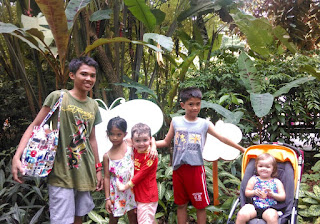 This is an x-ray that Mariza showed me one fateful Friday evening three months ago, unsure of what it meant. 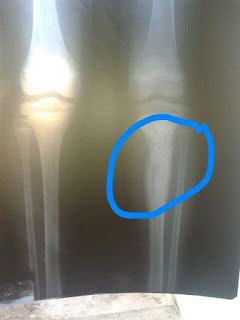 This is Dave six weeks ago, under anaesthesia after going in for a bone biopsy to confirm whether the malformation in the bone shown by the x-ray was, as suspected, cancer. 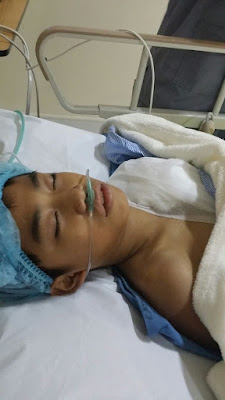 This is Dave last week, having had two rounds of chemotherapy. He has lost all of his hair. He has a catheter in his chest. He is in and out of hospital for blood transfusions and vitamin injections as the chemo medication has lowered his white and red blood cell counts and made him even more ill. 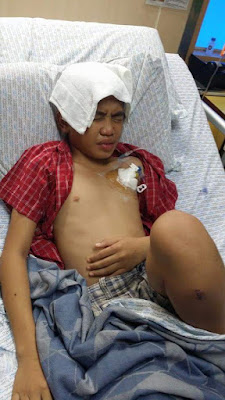 The bone biopsy on his leg showed that Dave has an aggressive osteosarcoma in his left tibia. Not only does he have cancer, but Dave has also lost the global healthcare postcode lottery by being in the Philippines. He has no insurance, and the state does not pay for his treatment. The cost of that treatment has so far run to tens of thousands of dollars, and he hasn't even had surgery yet. That surgery - a surgery which, if it goes to plan, would leave him cancer free, with total mobility in his leg, and without the need for further operations - is expected to cost over fifty thousand dollars, including the purchase of a smart implant which will replace part of the bone in his leg and grow with him as he gets taller. Factoring in the scans, the appointments, the chemo, the other drugs, the transfusions, the hospital stays, the operation itself, and all the many many other costs I am privileged enough never even to have had to think about because my totally-taken-for-granted health insurance policy covers all of it without question, in all likelihood it is going to cost around a hundred thousand dollars to make Dave whole again.

I need hardly say that this is a significant sum of money. Indeed, for many people, Dave included, it is a life-changing sum of money. It would take Mariza years to earn that amount, which is why so far we have been paying for Dave's treatment ourselves. But with the surgery in the calendar for the end of January, the time has come to accept that we also need help.

And this, as I imagine you may have guessed, is why I am here, talking to you about this, sharing these distressing images, this distressing story. There is a big tradition of fundraising through sponsorship in the UK - though much less so here in Asia - where people do crazy things and others contribute money to charity to do it. When it became apparent that the money we would need to get this surgery was beyond what we could afford ourselves, I thought long and hard about what on earth I could do to raise funds which was sufficiently insane to encourage people to donate, while not being actually either life-threatening or so time-consuming that I couldn't fit it in around work. Whatever I chose needed to be extreme enough to make people sit up and take notice, and to believe me when I say that this is something that I am passionate about, that I feel I really need to push the boundaries to achieve. Identifying options for this was not easy, largely because a lot of the stuff that people generally consider to be ridiculously hardcore and worth sponsoring, I would do on a weekend for fun.

Which is why, after lengthy consideration, and much dissent from those around me, I have decided that I will shave my head. I have about a foot and a half of hair that I reckon would take at least two years to grow back, and I am willing to whip the whole lot off and be a skinhead if it means this kid can not only live, but have the surgery he requires to live the life he would have had if cancer hadn't come and run him over.

So, it would mean the world to me (and obviously also to Mariza and to Dave) if you would please please please sponsor me. Even if you can only afford a token amount, every contribution will take us nearer the target of being able to pay for this surgery. I have set up a page on Indiegogo through which it is quick and easy to contribute, and recognising that this is a charitable fundraising drive, the platform does not take a commission on donations, so every cent you give will go straight towards the cost of Dave's treatment. 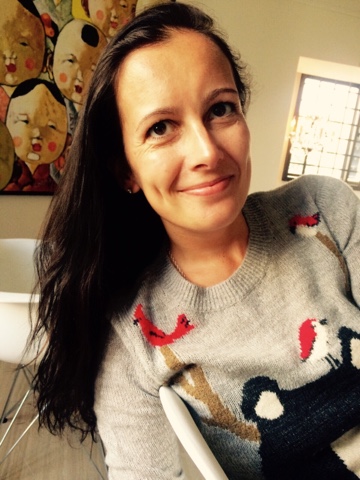 If you are in Singapore in January, you will be able to bear witness to the shaving - not only of my own head, but also those of Mariza herself and of my friend Adam, who are both taking the challenge too. We will be having an evening of drinks and a pub quiz in a central location at the end of which, hopefully emboldened/anaesthetised by a few glasses of wine, the three of us will all go under the clippers. We haven't set the date yet but I will post on here once we have made the arrangements.

I need to add some fine print here as I want to be completely transparent and upfront about the mechanics of this. This is not a donation to a registered charity. Apart from anything else, I don't have the time to set up a charity before the money will be needed to pay for the surgery. What I have set up through Indiegogo is a charitable crowdfunding site, which effectively acts as a temporary bank account for donations before the funds are transferred to me personally. I will then be transferring that money from my personal bank account to the hospital and to Dave's doctors to pay for his various treatments. Mr Hooker has offered (ahem, been enlisted) to be accountant for this, as it is way beyond my financial capabilities (which are unfortunately zero, maybe even slightly below zero). If you want to donate but you have questions about this process (or indeed about Dave's medical condition or the treatments he is having - we are in direct contact with his surgeon), please feel free to message me directly and I will be able to answer any questions you have. Finally, it is possible, though certainly not probable, that we may raise more cash than we need, and in that scenario I will donate all the surplus to a children's cancer charity here in Singapore.